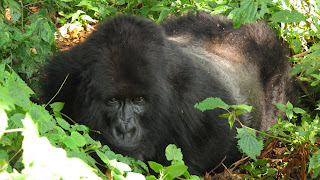 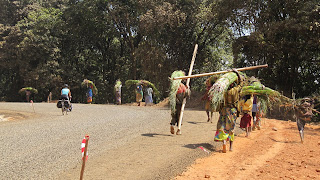 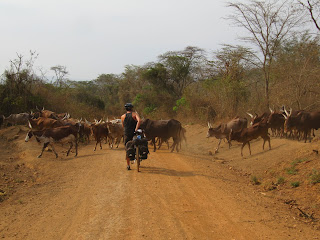 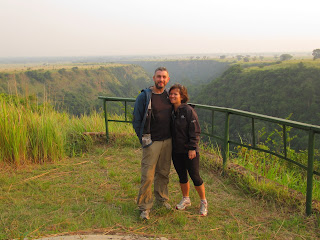 Tall buildings, choice of foods, i=Pads and Kindles and i-Phones, restaurants, public transport, trains and fast cars and smooth roads, friends, family and delicious meals and cold rainy days, delicious sandwiches and reliable electricity and running water... so many things to be excited about now we're back..

I'm trying to remember to be grateful for all those things but its easy to see that appreciation slipping away.
I miss the random and bizarre interactions and aspects of being in Ghana and then East Africa, the incredible friendliness and generosity of strangers, the warm sunny days or excruciatingly hot sweaty ones, the wonders of spending so much time outside, the slow loping pace, the vibrant colours and crazy drivers, the spontaneity and incredible kindness of all those who took us in (that applies to Scotland too).
Thank you. Lucy 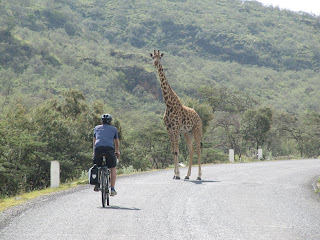 Travel as a selfish activity.. 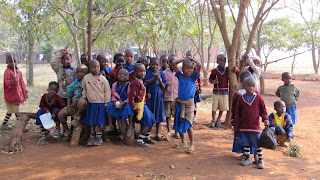 Travel is exhilarating and so many more things but ultimately its incredibly selfish. While we've been cycling around East Africa - exploring in a slow and almost old-fashioned manner - the area has been struggling with the worst drought for 60 years. We have, on the whole, been out of contact with the rest of the world and the route we have taken has generally been far more lush than I'd expected. While staying with relatives in Naivasha and Nakuru we saw first hand the concern and impact of less than average rainfall but since then there has been no mention of rain or its lack. It is only in crossing the west of Tanzania - and seeing dried up river-beds and hearing leaves so dry they crackle when they hit the earth. There is no doubt that we've been consumed by the practicalities of our route, where to buy food and water, how to avoid potholes, how to find a place to sleep but ultimately there are so few things to worry about day to day and we're guilty of sometimes forgetting the bigger picture and wider issues.

A long way further east the worst drought for more than 60 years is affecting millions of people.

To make a donation to the DEC East Africa Crisis Appeal call the 24 hour hotline on 0370 60 60 900, visit http://www.dec.org.uk or donate over the counter at any post office or high street bank, or send a cheque. You can also donate £5 by texting the word CRISIS to 70000.

Anyone wanting to stay up to date with developments in East Africa, the emergency response and the fundraising efforts can follow the DEC on twitter at http://twitter.com/decappeal or become a fan of 'Disasters-Emergency-Committee-DEC' on Facebook.
Posted by In brief at 06:06 No comments: 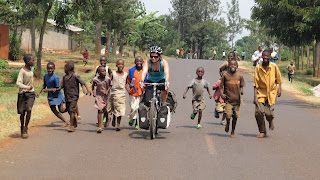 Totally unscientific study on women and cycling..
In Kenya we cycled with a lovely guy called Eric who covers 40km to
buy slightly cheaper maize over the Ugandan border which he can then
re-sell. He, as with most people we've met on the trip, seemed
genuinely shocked that a woman would and could ride a bicycle. And in
line with the comments of others, was particularly surprised that a
man would travel with his wife. "But where are your children? Who is
looking after them?" is what he and most others have asked. He told us
that there was research proving it was unscientific for women to
cycle. Interestingly women here are expected to walk for miles, carry
incredulous loads, balance children and do the farm-work but
apparently, they're too weak to cycle. So I've pulled together some
stats in a completely unscientific way..
In the course of cycling around Kenya, Uganda, Rwanda and Tanzania
we've seen about 58 women on bikes and tens of thousands of men.

The impediments are multifarious. In remote rural communities most
women don't have access to sufficient funds to buy a bicycle - still
something of a luxury. Men tell them they are not strong enough and
that it is inappropriate (even unreligious). And they are expected to
wear long skirts or dresses and carry their babies which makes it less
practical.
Bearing in mind that these communities have little or no access to
public transport, it makes the injustice somehow more significant.
Lucy
Posted by In brief at 12:19 No comments:

You get a bit of a feel for the nature of people when you're cycling along, generalisations based of course on nothing more than a few days experience. But it's quite interesting to think back at our perceptions of the distinctive character of different areas.

The Kikuyu we met were very educated and opinionated people - happy to speak with us on equal terms (depending on social class). Along the roadside you got a real warm feeling from people as they gave a nice open two handed wave and a big smile. This was often accompanied by shouts of 'Jambo'. I've no idea who told them that I was, but it was really nice of them to make me feel welcome.

Kalenjin people seemed incredibly modest, gentle and showed genuine interest in what we were up to, although certainly didn't force conversations or shout after us. Children would just smile and wave or run alongside.

Luo (Western Kenya and Eastern Uganda) were much more vocal and shouts of Muzungu, How are you? of Jambo tended to echo round the traditional homesteads as we passed through villages. The thousands of other cyclists often entered into conversation. Interesting to note that it would be largely men that would speak to us (ie me).

Jinja and Kampala had real multi-cultural feels with all sorts of tribes as well as Indians, North Africans and whites all over the place. Difficult to really get a sense of the places in just a day or two.

Uganda was a real surprise - incredible landscapes changing every few kilometres, great food and hospitality. Heading down the West of Uganda from Fort Portal not only the landscape but the language and feel of people changed every few kms. Literally go from one village to the next and people wouldn't understand the few local words you'd picked up earlier the same day. As we went south, the children became more and more excited and confident at approaching us, asking things and grabbing onto the bikes. Some villages the menfolk were hostile looking, others very friendly and open. Women generally were generally always cheery and waving. The most disappointing aspect of our interactions came closer to the border as children became more aggressive and continually demanded money, pens, books, sweeties...etc...etc. As Lucy has blogged about earlier, we learned that this has become a real problem caused by foreigners handing stuff out as if a few shillings is what will close the income gap.

This got incredibly frustrating as day after day we were looked as as stationery shops or confectioners. And it was in these last few days that we had a few things stolen from our bikes as we were moving - kids grabbing stuff from panniers.

An immediate change across the border in Rwanda. Language became a real problem - outside of the cities almost no-one has any English and only a few speak French. But the children no longer demanded stuff, they were just incredibly excited - overly so because they would grab onto all parts of the bike in excitement. This led to a comedy tantrum from Lucy and resulted in one little girl tumbling backwards into the ditch. Still, child abuse is (allegedly) common in these parts and the girl got up laughing.

There is certainly no mistaking the fact that this small country is massively overpopulated. There is almost no break in the houses all the way through and every piece of land, no matter the gradient, is farmed. Of course the country has a pretty horrific recent past and one weird aspect of the character is staring (maybe related, maybe not). Cycling along, fellow cyclists would just stay at our pace and stare. Not saying anything, no facial expression. Just stare. Whenever we stopped, crowds of people would gather in beside us and just stare without expression. No matter what we said, even in local language, did or gesticulated, the expression rarely changed. Very chlostrophobic and really difficult to handle when you're not used to it.

Crossing the border into Western Tanzania was just the most dramatic change imaginable. Suddenly space. Miles would go by with noting but the odd mud and thatch homestead. And people would just wave, say Jambo, or just show indifference to us. It was such a pleasant change after feeling so hemmed in. One particular aspect we noted was the deference that rural girls and even some adult women would show us. Many would quietly say a word that I can't remember how to spell, that literally means "I hold your feet", often accompanied by a curtsey. In fact lots of the kids demonstrated absolute terror at seeing us - running away or hiding in bushes. Probably Hibs fans.

Bit of a ramble but I found it nice to recall!
Andy
Posted by In brief at 08:01 1 comment: 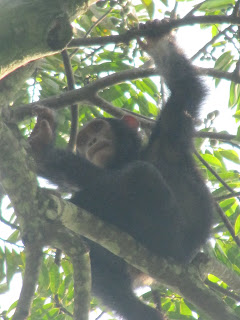 Both experiences shocked me. I was previously unaware how closely related Lucy was to the primates. 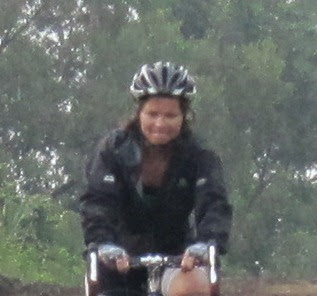 Things I didn't necessarily know before we set off....

1. It is possible to cycle 1750kms through East Africa without being eaten by lions, bitten by snakes, attacked by armed robbers, swallowed by potholes...
2. In Rwanda trying to bribe a police officer is punishable by three years in prison (not something we tested personally).
3. You can be imprisoned for making someone a birthday cake.. (see Ugandan President's birthday).
4. You can stand very close to a warthog without being harmed.
5. Drivers here are actually incredibly passive, despite seeming aggressive.. What happens while they are driving is not considered to be in their hands.
6. People can almost run you down and simultaneously greet you like a long lost cousin. 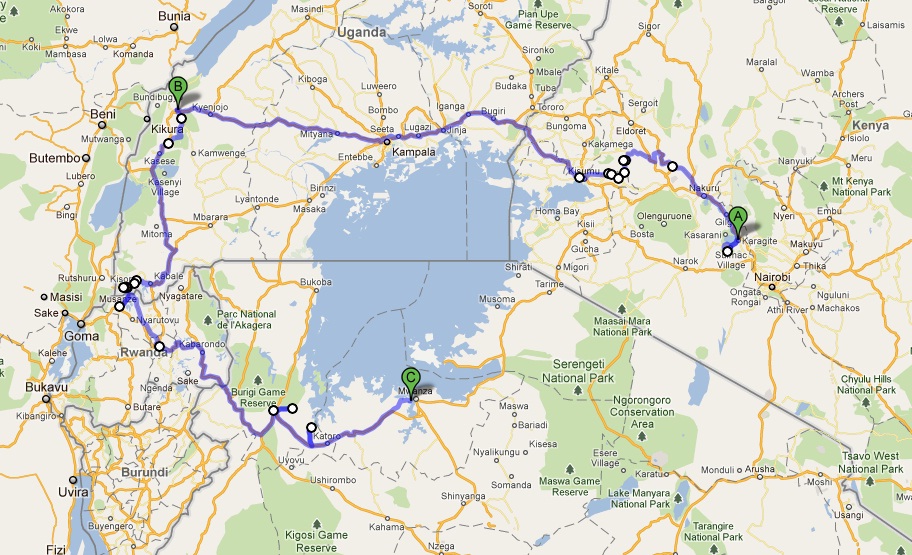 1750km cycling (map not quite right due to Google errors)